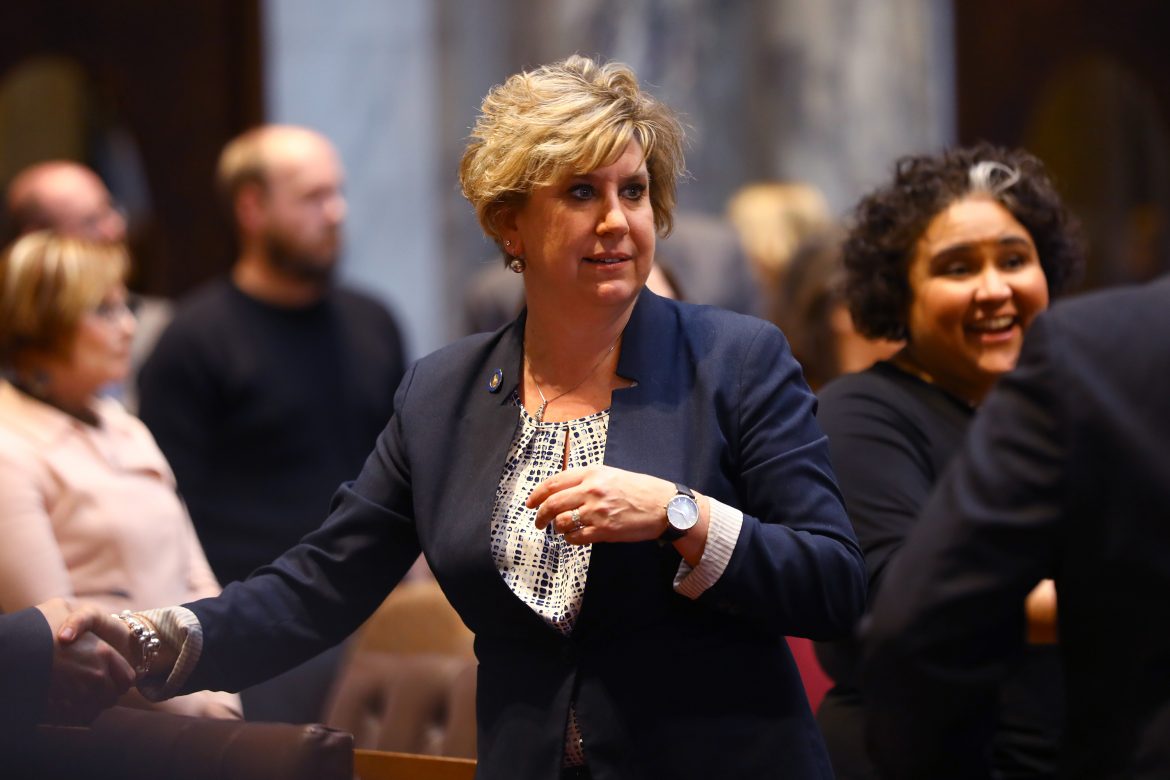 Senate Minority Leader Jennifer Shilling, D-La Crosse, wonders why Wisconsin is paying $8 million to convince people to return to the state. But is that assertion true? We check it out. She is seen here at the State of the State address on Jan. 24, 2018.

“Why are we spending $8 million on advertising to persuade people to come back to Wisconsin?” State Senate Minority Leader Jennifer Shilling, D-La Crosse, asked on Jan. 24.

Shilling was questioning measures by Gov. Scott Walker and legislative Republicans that direct the Wisconsin Economic Development Corp. (WEDC) to develop and implement initiatives for the attraction of talent to and retention of talent in Wisconsin.

If there are so many reasons for people to stay, why are we spending $8 million on advertising to persuade people to come back to WI? #WIBrainDrain #SotSWI

We check out her claim that the state will spend $8 million on advertising to persuade people to come back to the state.

Shilling’s office cited legislation introduced by Republicans, Senate Bill 679 and Assembly Bill 811, which provide for a $6.8 million initiative, and a separate $1 million marketing campaign announced by WEDC as evidence for the claim.

“Wisconsin’s strong economy has resulted in the lowest unemployment levels in decades and a record labor participation rate, which means it’s more important than ever to attract and retain a strong talent pool,” Walker said in announcing the $1 million campaign. “WEDC’s strategic investment delivers the message to Chicago millennials that Wisconsin offers unlimited opportunities for personal, professional and business success.”

“In November of last year, our unemployment rate stood at 3.2 percent, easily beating the national average of 4.1 percent,” Rohrkaste said at the Jan. 24 hearing. “At the same time, Wisconsin’s labor force participation rate has reached an all time high of 68.9 percent, well above the national average of 62.7 percent. Wisconsinites are working, and employers are continuing to search for qualified applicants for the tens of thousands of job openings in our state.”

The bill says funds will be allocated for attraction and retention incentives, but the majority of the money is going to be used to attract people to Wisconsin, according to WEDC spokesman Mark Maley.

“While our target audience does include alumni who attended Wisconsin colleges and universities, the majority of the proposed $6.8 million investment will be devoted to millennials in the Midwest and transitioning veterans, who may or may not have a prior connection to Wisconsin,” Maley said.

In addition, WEDC has a $1 million marketing campaign aimed at young professionals in Chicago. The campaign places an emphasis on reaching millennials via popular social media platforms. The ads are available here. Maley said the additional $6.8 million will allow WEDC to “expand its talent marketing initiatives to audiences beyond Chicago.”

The Chicago campaign, which plans to target young professionals within a 20-mile radius of downtown, include posters in health clubs and ads on coasters in downtown bars. The effort launched in January is already drawing reaction, but not all of it positive.

The Chicago Reader described placards found on Chicago’s “L” train system as juxtapositions of “dejected-looking young straphangers” with “shiny, happy people drinking beer on a terrace above Madison’s Lake Monona.” But when the Reader interviewed riders, some said they would rather ride the train than battle traffic in a place like Wisconsin with few mass transit options.

Shilling said the state would not need advertising campaigns if current state policies made Wisconsin a better place to live.

“It is ridiculous Gov. Walker and Republicans aren’t looking at their own policies that have driven away young adults and contributed to our state’s brain drain crisis,” Shilling said. “Millennials are increasingly choosing to live in states that invest in public transit, promote workplace flexibility and support student loan debt relief.”

While Maley said the majority of the money will be used to attract new people to Wisconsin, it also will be used to target people who went to college in Wisconsin and those who may have a connection to the state.

So Shilling’s contention that the state is spending $8 million to bring people back to Wisconsin is at least partially right. Therefore, The Observatory rates Shilling’s claim as mostly true.