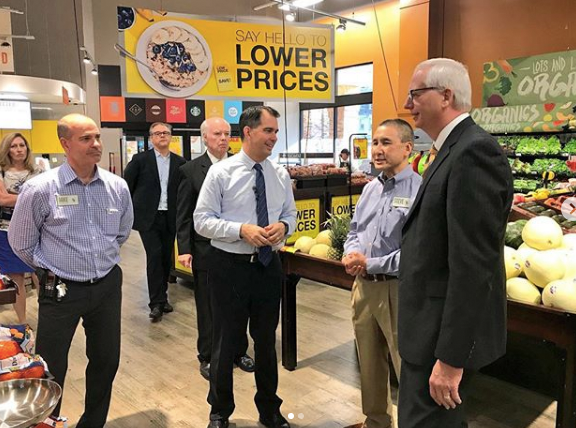 Gov. Scott Walker tours Metro Market in Milwaukee on Sept. 13, 2018 to see Kroger and Roundy’s $300 million investment in their 106 Wisconsin stores. In his run for a third term, Walker is touting the strength of Wisconsin’s economy under his tenure.

In a tweet from Sept. 3, Gov. Scott Walker praised Wisconsin’s economy, claiming “wage growth in Wisconsin is higher than the national rate. And the percentage of people working is one of the best in the country.”

The Observatory checked both claims by Walker.

According to Walker, Wisconsin’s wages are growing faster than the national rate. When asked about the claim, Walker’s campaign press secretary Austin Altenburg referenced a July BizTimes article. From January to May of 2018, Wisconsin experienced a year-over-year increase of 5.7 percent, according to the article. The U.S. average was 2.7 percent.

Altenburg also sent a link to a tweet from University of Wisconsin-Madison economics professor Noah Williams, who said Wisconsin’s wages grew 5.9 percent from June 2017 to June 2018. The national average during that time was also 2.7 percent. Because each of these sources looks at a different time frame, the percent increase for Wisconsin and the United States is different. However, no matter the time frame, Wisconsin’s wage growth is beating the national average.

While Wisconsin’s wage growth rate is higher than the national rate, the average Wisconsinite is paid less per week than the average American. Nationally, the average weekly wage was $1,152, and in Wisconsin, it was $968, according to the U.S. Bureau of Labor Statistics.

“Low-wage jobs – indeed, low-wage careers – define and constrain the prospects of too many workers,” COWS found. “And … while racial inequality is not unique to Wisconsin, it is extreme here.”

Despite these caveats, The Observatory rates Walker’s first claim, that the state has experienced higher wage growth than the national average, as Verified.

Walker’s second claim was that the percentage of people working in Wisconsin is one of the best in the country.

The state has a 69 percent labor force participation rate compared to the national rate of 62.9 percent, according to COWS. This is the fifth highest rate in the country. Wisconsin’s neighbors Minnesota, Iowa, Illinois have an unemployment rate of 2.9, 2.5 and 4.1 percent, respectively.

In April, The Observatory found that although the state’s unemployment rate was at a historic low, many Wisconsinites have to work two jobs due to low wages.

Overall unemployment is low, and labor force participation is high, but that leaves out the context of high unemployment for black residents. As a result, it does not provide a complete picture of Wisconsin’s economy — especially since the disparity between white and black unemployment is the worst in the nation.