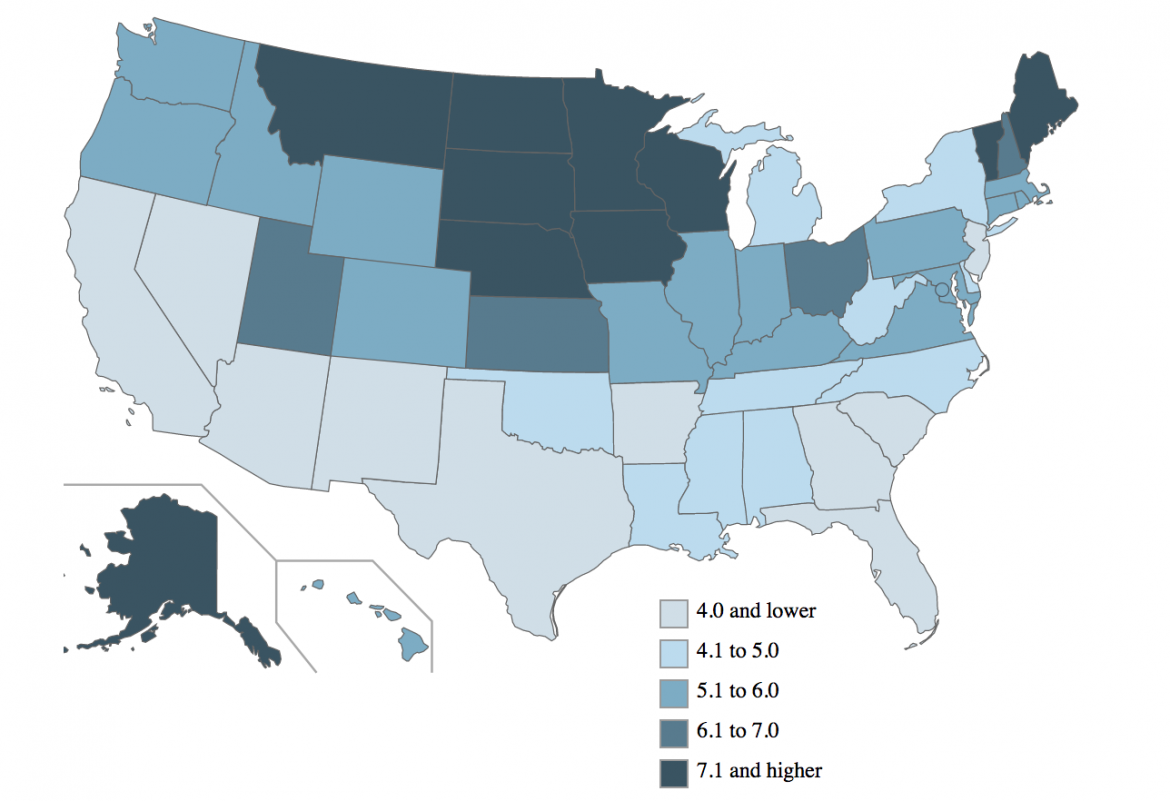 In 2015, the multiple-jobholding rate (the percentage of individuals who hold more than one job) in individual states varied considerably. As of 2015, an estimated 7.6 percent of working age Wisconsin residents held down two or more jobs, according to the U.S. Bureau of Labor Statistics. That is far above the national average of 4.9 percent, and the sixth highest among all the states.

In a Jan. 24 blog post, Gronik condemned Walker for low wages that he said lead to residents having to work multiple jobs.

Said Gronik: “Wisconsinites will remember Walker’s failures when they go to work at that second, third or fourth job because their wages are so low that one job won’t cut it.” The Observatory checked this claim.

Although Wisconsin’s unemployment rate was at an all-time low of 2.9 percent in February, 2017 data from the Bureau of Labor Statistics illustrates that every Wisconsin county had below-average employee wages during the fiscal year.

Statewide, Wisconsin ranked 29th for its wage changes and 32nd for its average weekly wage of $876.

Steven Deller, University of Wisconsin-Madison professor of agricultural and applied economics, said the inverse wage trends — high employment but low wage — is the result of a “hollowing out of the middle class.” That is, the state’s ongoing employment growth is due mostly to the addition of jobs requiring low skills for accordingly low pay.

“We’re getting a lot of growth at the low occupation levels,” Deller said. “That kind of middle class type job is becoming more and more difficult to find.”

In a 2014 report from UW-Milwaukee’s Center for Economic Development, Marc Levine echoes Deller, attributing Wisconsin’s low wages to “downward pressure on historically middle-wage jobs.” This downward pressure simultaneously occurred with an ongoing growth in low-wage jobs, which was compounded by a “surge” of those positions in 2010, a period marked by post-recession recovery, Levine said.

At the time of the report, low-wage jobs had the highest growth rate of 18.7 percent between 2010 and 2013, while the number of middle and high-wage jobs declined at rates of 1.3 and 2.9 percent, respectively.

In addition, as of 2015, an estimated 7.6 percent of working age Wisconsin residents held down two or more jobs, according to BLS data. That is far above the national average of 4.9 percent, the bureau found, and the sixth highest among all the states, reflecting Gronik’s charge that “wages are so low (in Wisconsin) that one job won’t cut it.”

According to data from the Pew Charitable Trust, COWS and UWM the trend of a shrinking middle class predates Walker, who took office in 2011.

However, some of the 5.7 percent decline in the share of families in the middle class in Wisconsin between 2000 to 2013 took place during Walker’s tenure. “That is the largest decline posted by any state in the nation,” COWS noted.

Employment is growing in Wisconsin, but wage growth in many sectors is lagging. And Wisconsin does rank far above the national average when it comes to workers holding multiple jobs. Therefore, The Observatory rates Gronik’s claims as Verified.