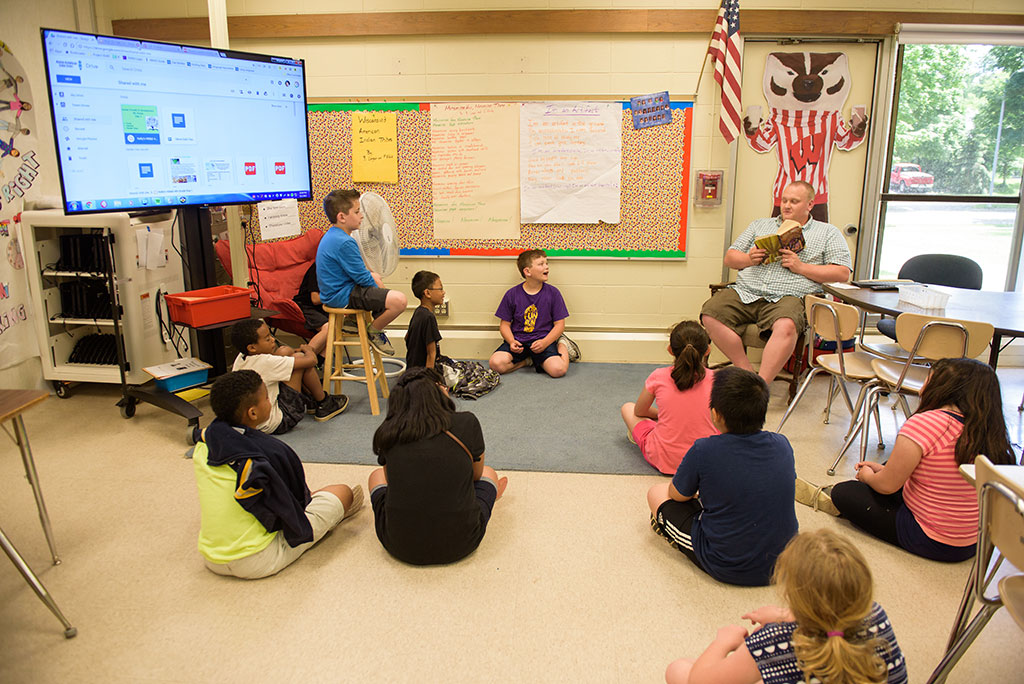 Students in Ben Langer's 4th grade classroom at Madison’s Lindbergh Elementary School listen as he reads aloud from Harry Potter and the Sorcerer's Stone at the end of the 2016-17 school year. Democratic candidates for governor are debating the size of funding and revenue limit cuts made by Gov. Scott Walker and the Legislature during his first term.

“Our governor cut $1.6B from education is (sic) his first budget, now is putting back $638 million. That’s not progress, it’s an insult,” Mahlon Mitchell, Democratic candidate for governor and president of the state firefighters union, said in a March 17 tweet.

We decided to check how much aid for K-12 education was cut in Gov. Scott Walker’s first budget and how much was added to the current budget.

Walker proposed an increase of $649 million in education spending in the 2017-18 school year. However, the Legislature approved a budget that brings the boost down to $639 million, by spending less than what Walker proposed on rural schools and high-performing Milwaukee schools.

When signing the bill in September at Tullar Elementary School in Neenah, Walker claimed that the increase in education funding was historic.

“I thank the Legislature for keeping the core of our budget in place, which includes historic K-12 education funding,” Walker said in a press release. “The budget proves you can provide more money for our schools and lower property taxes at the same time.”

While Mitchell’s estimate of $638 million in increased school aid is a bit off, we rate it as Verified.

But did Walker really cut $1.6 billion from schools in his first two-year budget?

According to a 2012 report by the Wisconsin Department of Public Instruction, general school aids were cut by $749 million in Walker’s first two-year budget. Also, the revenue limit — the amount districts can raise from state aid and local property taxes — was reduced by $1.6 billion from prior law.

It was not clear in 2011 when the revenue limit was reduced by $1.6 billion whether it should be considered a dollar-for-dollar cut. In fact, PolitiFact Wisconsin cited several sources that put the actual reduction at no more than $900 million, given the fact that not all districts “tax to the max.” That number also does not include hundreds of millions of dollars that districts saved when Act 10 took effect, requiring teachers and other public employees to contribute more to their health and retirement benefits. It rated the $1.6 billion cut claim as “mostly false.” Retired University of Wisconsin-Madison professor Andrew Reschovsky says the $1.6 billion reduction in school district revenue limits in 2011 did not result in a dollar-for-dollar cut in school spending, but “probably was pretty close.” But Democrats were the first ones to make the cuts, meaning Gov. Scott Walker should not be completely blamed for lower revenue limits.

University of Wisconsin-Madison emeritus professor Andrew Reschovsky wrote in 2014 that between 2002 and 2009, 95 percent of school districts did levy property taxes to the maximum allowable limit. In 2012, about 90 percent of districts were levying up to the limit — meaning that the revenue limit reductions enacted in 2011 became, for many districts, actual spending cuts, he said in an April interview.

“The fact that over time most school districts in Wisconsin chose to levy property taxes up to their allowable levies suggest that the revenue limits imposed on school districts by the state legislature may be binding on many school districts,” wrote Reschovsky, who now is a research fellow at the Lincoln Institute of Land Policy in Cambridge, Massachusetts.

After looking at the effects of the reduction to revenue limits a number of years later, Reschovsky said in an interview that while it is not accurate to say there was a $1.6 billion cut to school spending, the number “probably was pretty close.”

There is something else that needs to be mentioned that happened just prior to Walker taking office, however.

Dan Rossmiller, government relations director for the Wisconsin Association of School Boards, explained that cuts were made to revenue limits during the national recession under former Democratic Gov. Jim Doyle. That Legislature, also run by Democrats, directed the next Legislature to increase revenue limits by $75 per student in the 2011-13 budget to what they were before they were tightened.

When Walker and the Republicans took control of the Legislature, they turned to school cuts and revenue limits to help balance the budget and decided not to enact the higher limits set by the Democrats.

Instead of a per-pupil dollar figure, the 2011-13 state budget reduced state-imposed revenue limits for all public school districts by cutting it by 5.5 percent per pupil in the 2011-12 school year compared to the 2010-11 school year.

Rossmiller said there are two angles to look at when examining how much Walker cut from revenue limits.

“One reason for the discrepancy in the figures quoted is whether you measure the starting point for the 5.5 percent reduction from the revenue limits that were actually applied in 2010-11 or the number that would have been applied had the prior Legislature’s adjustment remained in effect. The difference amounts to about $233 million in the first year (2011-12) alone,” Rossmiller said.

In examining Mitchell’s claims, it is true that the current budget contains about $638 million more in K-12 spending compared to the previous year. But it is not 100 percent accurate to claim that Walker cut education spending by $1.6 billion in his first two-year budget.

Since some of the cuts originated with the Democratic administration and Legislature which preceded Walker, it is not accurate to say he’s completely responsible for a $1.6 billion cut to education in his first budget.

While it is a close call, the Observatory rates this claim as Mostly False.