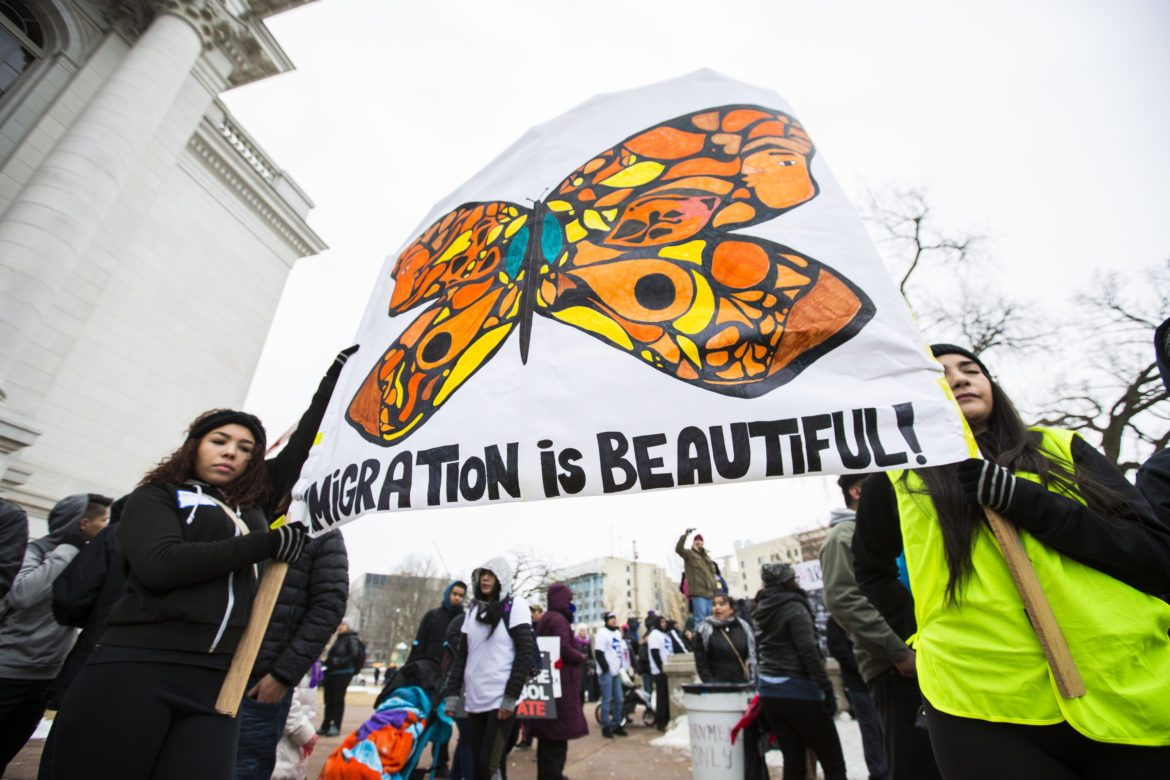 Latinos protest immigration bills and demonstrate their contribution to the Wisconsin economy outside the state Capitol building in Madison, Wis., on Feb. 18, 2016 during the Day Without Latinos, event. U.S. Rep. Mark Pocan of Wisconsin says President Donald Trump’s decision to send military troops the border with Mexico is aimed at keeping out immigrants, not fighting drug smugglers. We check out his claim.

The Wisconsin Democrat Pocan wrote that, “President Trump is not sending troops to the southern border to stop the flow of drugs from Mexico. It is clear that his goal is to apprehend migrants, many of whom are children fleeing violence in their home countries.”

While we are unable to accurately assess Trump’s motivations, The Observatory decided to check the claim that many of the people coming across the southwest border who are unauthorized are children and that they are fleeing violence in their home countries.

Of that number, 41,435 were children who came across unaccompanied and another 41,131 were with an adult, for a total of 82,566 children. That means 27 percent of all people apprehended at the border between Mexico and Texas, New Mexico, Arizona and California were children.

By comparison, 11,645 people, or 4 percent, were arrested for alleged drug smuggling during that time period.

And more than half of all apprehensions, or 175,978 people, were from places other than Mexico. Those countries include El Salvador, Guatemala and Honduras, where violence has prompted a growing number of people to seek legal asylum in the United States.

Walker has not always favored strict immigration enforcement. In the past, Walker supported legislation that some conservatives criticized as “amnesty.” In 2006, he signed a resolution calling on Congress to pass the Secure America and Orderly Immigration Act, a bill introduced by U.S. Sen. John McCain, a Republican from Arizona.

One of the key elements of the bill was allowing undocumented immigrants who arrived in the United States on or before May 12, 2005 to register for a temporary visa that would be valid for six years. They would have to pay a fine and back taxes, and have the opportunity to obtain permanent legal status later on. The bill failed to pass.

But in 2015, when he was a presidential candidate, Walker denounced a similar program, calling for the repeal of Deferred Action for Childhood Arrivals (DACA). Trump rescinded former President Barack Obama’s executive order establishing DACA and gave Congress a deadline of March 5, 2018 to come up with legislation to determine what would happen to DACA recipients. Trump’s action has been blocked by federal court decisions.

The program protects people from deportation who entered the country illegally as children. DACA gives its recipients work permits and protection from deportation for two years, which can be renewed. There are an estimated 800,000 unauthorized immigrants who are being protected by DACA.

“After that (repeal of DACA), we need absolute security at our borders and then we can address fixing our legal immigration system and deal with those here illegally, but amnesty is not the answer,” Walker said in 2015.

For his part, Pocan supported the 2013 Border Security, Economic Opportunity and Immigration Modernization Act, describing it as comprehensive immigration reform that had bipartisan support. While the bill passed in the Senate, it was killed in the House of Representatives.

Returning to Pocan’s claim that sending troops to the border was more about stopping migrants than fighting drugs, Border Patrol statistics show a significant portion of those crossing the southwestern border illegally in the last year were children, just as Pocan said.

And more than half of all of those apprehended came from countries other than Mexico, such as El Salvador, Guatemala and Honduras, which are experiencing significant violence, supporting Pocan’s claim that many of the migrants are fleeing violence.

Four percent of the arrests did involve people allegedly smuggling drugs. So it is likely that troops sent to the border would help with drug enforcement as well.

But statistics show the overwhelming majority of the 303,916 people apprehended at the southwest border were not drug smugglers, and 27 percent of them were children. So we rate Pocan’s claim, Mostly true.