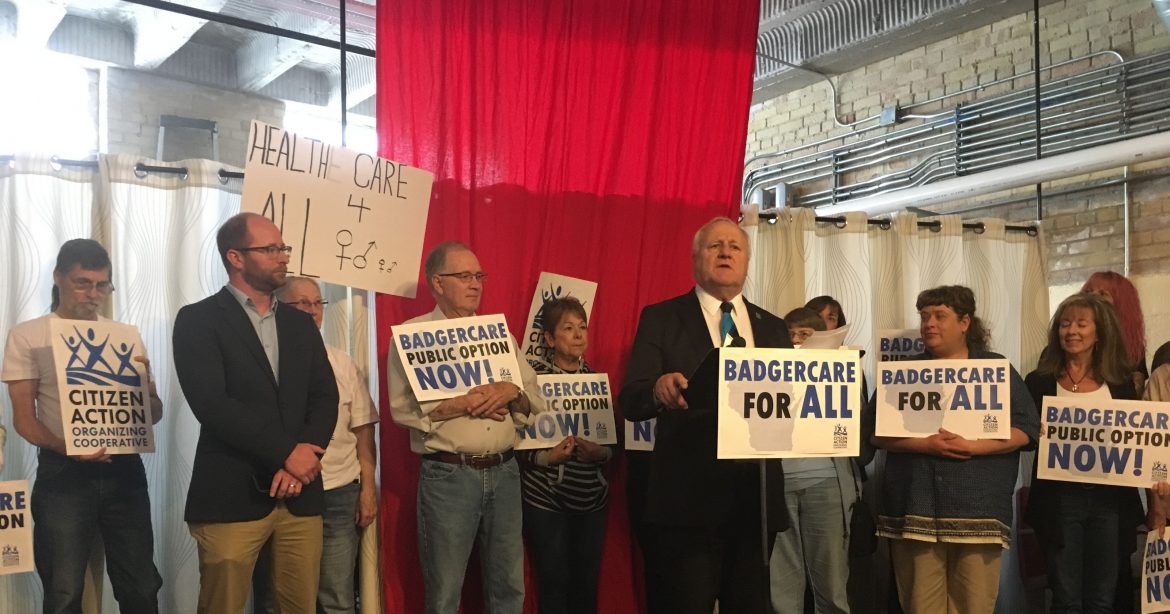 Sen. Dave Hansen, D-Green Bay, advocates for a 2017 bill that would have opened up BadgerCare coverage for all Wisconsin residents. Currently, the Medicaid-funded program is reserved for poor residents. Gov. Scott Walker claims everyone under the federal poverty level in Wisconsin is covered by BadgerCare. We find that claim to be true.

As Gov. Scott Walker ramps up his re-election campaign, his promotional videos tout a list of accomplishments while he has been in office, including “stabilizing” Wisconsin’s health care program for the poor.

In a campaign video on Feb. 6, Walker claimed, “We’ve covered everyone living in poverty under Medicaid, without the Obamacare expansion.”

According to the Wisconsin Department of Health Services, Wisconsin’s Medicaid program — also known as BadgerCare — does cover all Wisconsin residents who are U.S. citizens and qualifying immigrants whose household income is up to 100 percent of federal poverty level (FPL) — $12,140 for an individual.

But Wisconsin didn’t take the federal Medicaid expansion in 2013 — part of the Affordable Care Act, or Obamacare — and instead instituted the BadgerCare Reform Demonstration Project.

Under this program, Wisconsin is the only state with no coverage gap, that is, residents whose incomes are too high to qualify for Medicaid but too low to qualify for tax credits under the ACA, according to a report by Henry J. Kaiser Family Foundation.

While the governor’s statement is accurate, it doesn’t speak to the broader issues usually raised about this claim.

For Jon Peacock, research director for the Wisconsin Council on Children and Families, there are three issues with the statement: Without the federal expansion, BadgerCare costs Wisconsin taxpayers more and covers fewer people; it sends people to the marketplace for health insurance, which does not work for everyone who is just above the poverty level; and the governor has proposed an $8-a-month premium for some residents that could increase the number of people who are uninsured.

Under the ACA, the federal government provided incentives for states to offer Medicaid coverage to those at 138 percent of the FPL or below. At that time, Wisconsin’s BadgerCare covered all uninsured children, pregnant women at 300 percent FPL, parents or caretakers  at 200 percent and childless adults at 200 percent FPL capped at about 65,000 participants.

“I turned down a Medicaid expansion under Obamacare. And I got to tell you, that was kind of tough in a blue state like Wisconsin. There were even some Republicans that wanted us to grab the money,” Walker said in a 2015 presidential campaign speech.

Instead, Wisconsin submitted a waiver application to the federal government for its BadgerCare Reform Demonstration Project. When the program took effect in 2014, everyone at 100 percent FPL became eligible for Medicaid benefits with no enrollment cap; the eligibility for children and pregnant women remained at 300 percent.

This change sent about 63,000 people with incomes over 100 percent of the federal poverty level from Medicaid to purchase coverage in the federal marketplace. But about 83,000 more childless adults were able to get Medicaid coverage, according to DHS.

If the state had opted for the Medicaid expansion, it could have saved $1.1 billion — and covered an additional 79,000 parents and childless adults — between 2014 and the end of the current biennial budget in 2019, according to the Legislative Fiscal Bureau.

Under that scenario, the federal government would have paid a steadily reducing proportion ranging from 100 and 93 percent of Medicaid costs for anyone with a household income up to 138 percent FPL during those years. Beginning in 2020, the federal contribution for newly eligible individuals will be 90 percent.

Because Wisconsin rejected the expansion, the state currently pays 41 to 42 percent and the federal government pays about 58 to 59 percent of Medicaid costs.

When Walker rejected the expansion, he said he did not believe the federal subsidy would be maintained. He also claimed that expanding the program would be immoral, according to the Isthmus.

“From a moral standpoint, are we really doing the people of this state a service if we continue to build a series of programs whose overwhelming purpose is to add more people to that system?” he asked at a Wisconsin Manufacturers and Commerce meeting in 2013.

As of 2015, there were still 77,000 people in Wisconsin under the FPL who are uninsured, according to the most recent DHS Family Health Survey. To an extent, having some eligible residents not covered is “inevitable,” according to Peacock.

He said a few may be non-citizens who are ineligible but, “I don’t think the state is doing as much as it should to promote eligibility. I think that helps explain why we still have (about) 10 percent of people below the poverty level who are uninsured.”

If low-income residents earn more than the federal poverty level, they may qualify for coverage under the ACA. But Peacock said many low-income people don’t have checking accounts or credit cards to pay the premiums.

Additionally, when the state applied to renew the waiver in 2017, it included a stipulation that households at 51 to 100 percent FPL would have to pay an $8-a-month premium. For people with an income of $1,000 or less per month who have to pay for rent, transportation, food, a phone bill and more, even $8 can be too much, Peacock said.

The Observatory rates Walker’s claim that Wisconsin has “covered everyone living in poverty under Medicaid, without the Obamacare expansion” as True.

Wisconsin has made every resident who is a U.S. citizen or qualifying immigrant at or below the federal poverty level eligible for Medicaid coverage under BadgerCare. Wisconsin is also the only state with no coverage gap.

However, the governor’s claim does not mention that the state is covering fewer people at a higher cost and that for a variety of reasons, tens of thousands of people who live below the poverty line in Wisconsin remain uninsured.