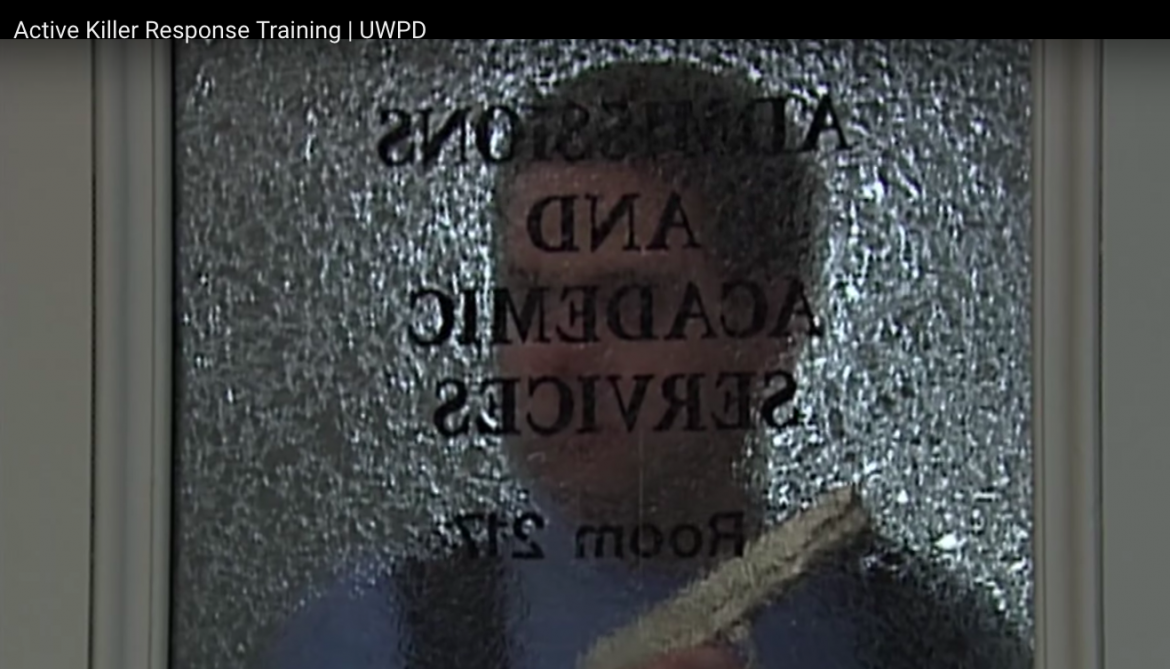 A still image taken from a video by the University of Wisconsin-Madison Police Department that trains students and staff members to run, hide and then fight when confronted by a shooter on campus. Wisconsin allows colleges and universities to prohibit firearms in specific buildings by posting signs on the entrances. Guns are banned on all K-12 schools in Wisconsin with few exceptions.

Congressman Jim Sensenbrenner, who represents the Fifth Congressional District in southeast Wisconsin, said in a town hall meeting in Watertown on Feb. 25 that, “There has been a law on the books for over 20 years that makes it illegal to carry a firearm within 1,000 feet of any school in the country.”

The Observatory decided to examine the different elements of this claim — that the law has existed for over 20 years and that it is illegal to carry a firearm within 1,000 feet of any school.

Sensenbrenner’s office provided The Observatory with information that this claim was in reference to the Gun-Free School Zones Act (GFSZA) of 1990 (Senate Bill 2070). The legislation was part of the Crime Control Act of 1990.

The first law, and the one Sensenbrenner was referring to, is the GFSZA. This law makes it illegal for any individual to knowingly carry a firearm in a school zone, which the law defines as the distance of 1,000 feet from the grounds of a public, parochial or private school.

Although the Gun-Free School Zones Act deems K-12 schools to be “gun-free zones” it has an important loophole — it doesn’t apply to individuals licensed by a state to possess or carry a handgun.

There are also two other exceptions to the possession of firearms in school zones. First, guns can be on schools grounds if the firearm is not loaded and “in a locked container, or a locked firearms rack that is on a motor vehicle.” The other is if the firearm is possessed for use in a program approved by a school, or in accordance with a contract entered into between a school and the individual or and employer of the individual.

Another federal law is the Gun-Free Schools Act (GFSA), enacted in 1994 as a response to gun violence in schools. The GFSA requires schools receiving certain federal funds to expel students who bring firearms to school for one year, except in certain circumstances. This is unlike the GFSZA, which applies to any person carrying a firearm in a school zone.

As with the GFSZA, the Gun-Free Schools Act has an exception that allows the possession of a firearm if it is stored inside a locked vehicle on school property or if it is possessed for a school activity approved and authorized by the local educational agency.

There are also state laws that regulate weapons in K-12 schools. Wisconsin is among 40 states and Washington, D.C., that extend the weapon ban to include people with a license to carry a concealed weapon; 10 states allow such gun owners to bring firearms onto school grounds.

Two states allow schools to decide whether or not to ban concealed weapon permit holders, meaning that eight states either allow this or have no law barring it. These states are Alabama, Alaska, Hawaii, New Hampshire, Oregon, Rhode Island, Utah and Wyoming.

On college or university campuses, most states either prohibit or restrict firearms, or allow those institutions to set their own rules. In 12 states that force public colleges or universities to allow the concealed carry of guns in some or all areas of the campus, some including Wisconsin allow the campuses to post specific buildings where firearms are prohibited.

Sensenbrenner’s claim that there has been a law for over 20 years in the United States that makes it illegal to carry a firearm within any school in the country is correct as the Gun-Free School Zones Act was enacted in 1990 and it makes it illegal for the possession of a weapon within 1,000 feet of the school.

However, there are loopholes in the law that allow for individuals to bring guns within both K-12 schools and university or college campuses. As such, The Observatory rates this claim as being Mostly true.