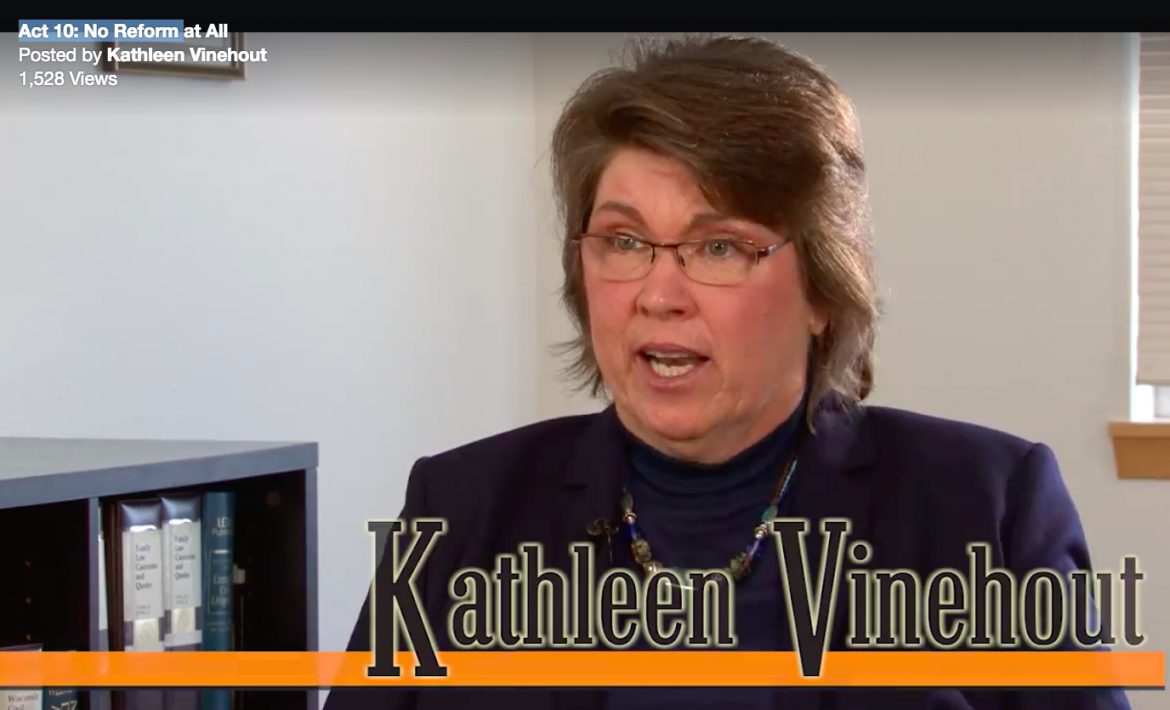 Democratic candidate for governor Sen. Kathleen Vinehout claimed in a March 2018 campaign video that Wisconsin Gov. Scott Walker’s signature Act 10, which strips most collective bargaining rights from public employees, has led to a teacher shortage. We check her claim.

“After Act 10 teachers left the profession. Young people going into teaching changed their majors. Now we have a teachers’ shortage. We must repair the damage done by Act 10. We’ve got problems now and they are only going to get bigger.”

The Observatory decided to check. We examined her statement as three separate items. The first being that after the enactment of Act 10, there has been an exodus of teachers in Wisconsin. The second that there are fewer young people pursuing teaching degrees. Lastly that there currently is a teacher shortage in the state.

When The Observatory contacted staff from Vinehout’s office, they provided us with multiple sources they used to support her claims. A protester signals his displeasure with Gov. Scott Walker’s plan, later adopted by the Republican-run Legislature, to strip collective bargaining rights from most public employees in Wisconsin, including teachers, during this Feb. 17, 2011 demonstration at the state Capitol in Madison. Sen. Kathleen Vinehout, who is running for governor in the Democratic primary, claims the change has harmed teachers and education in the state.

Wisconsin Act 10 was signed into law on March 11, 2011 by Republican Gov. Scott Walker. It reduced collective bargaining rights for state and municipal employees, which includes K-12 teachers. And it required teachers and other public employees in Wisconsin to pay more toward their retirement and health care plans.

The law weakened unions by implementing mandatory annual recertification elections and prohibiting paycheck deductions for union dues collection. It also eliminated teachers’ and other public employees’ rights to bargain about pay, hours and other conditions of employment.

Have teachers left the profession?

A 2017 analysis by the Center for American Progress Action Fund, which is an independent, nonpartisan policy institute that advocates for progressive policies, shows that a large number of teachers have left the teaching profession in Wisconsin after the enactment of Act 10. This is especially true in the 2010-11 school year, when the increase in teachers aged 55 and over retiring jumped from about 15 percent in the 2009-10 school year to over 30 percent.

It is important to note that the findings of the Center for American Progress Action Fund includes all teachers who taught in Wisconsin public schools in a given year and didn’t teach in the year following. Some teachers later returned to their public school classrooms after gaps in their career.

This isn’t surprising as reports on the aftermath of Act 10 found teachers were spurred to seek retirement in order to keep early retirement benefits, such as health insurance. This surge in 2011 of teachers leaving the workforce was mostly teachers above the age of 55, which under the Wisconsin Retirement System is the minimum age to receive benefits.

The Observatory rates Vinehout’s claim that teachers have left the profession after Act 10 as Verified.

When asked to verify that students are changing majors, Vinehout’s staff instead pointed us to data showing that fewer college students are pursuing education degrees.

Since the implementation of Act 10, there has been a decrease in enrollment in teacher preparation programs in Wisconsin, a University of Wisconsin-Madison report found. And according to a Journal Sentinel special report, 2015 saw the smallest group of juniors and seniors enrolled in teaching programs in over two decades.

For example, the Green Bay Press-Gazette reported that between 2009 and 2013, UW-Oshkosh saw the number of students majoring in education decline by 25 percent.

The paper notes that it is tempting to label Act 10 as the cause of the decline as these decreases start in “earnest following the enactment of Act 10.” But trends for the same timeframe show there has been a decrease in teacher training and licensing nationwide — although less than in Wisconsin.

Although multiple factors influence educational outcomes, such as student demographics, parental involvement, teacher quality and government policy, research has shown that students perform better when taught by teachers with more experience, according to the Learning Policy Institute, which conducts and communicates research to improve education.

Proponents of Act 10 underlined that removing requirements to negotiate over salary, hiring and working conditions would give schools more flexibility to attract and retain higher-quality educators, but this doesn’t seem to be the case.

The Observatory rates the claim that fewer young people are pursuing teacher qualifications as Mostly True, because although Act 10 may be a factor, this is in fact part of a national trend.

With a large number of teachers retiring after Act 10 and dwindling numbers of new teachers entering the profession, it is no wonder that Wisconsin is currently experiencing a teacher shortage.

The Department of Public Instruction confirmed in an email that “the shortage exists but in particular fields of high demand,” including certain subject areas and in “cross-categorical” special education in which teachers are certified to educate students with varying needs. The shortage also exists only in some regions of Wisconsin, DPI spokesman Thomas McCarthy said.

The total number of teachers in Wisconsin has decreased by 2.2 percent between the 2009-10 school year and 2015-16, according to a 2017 report from the Public Policy Forum. The nonpartisan, nonprofit organization is dedicated to enhancing the government and development of southeastern Wisconsin by researching regional public policy issues.

According to a 2017 report by the Wisconsin Budget Project, Wisconsin school districts struggle to fill vacancies, especially in math, science and technology. The report notes that one reason for teacher shortages is high turnover.

Since the adoption of Act 10, there has been an increase in teacher turnover — when a teacher leaves one Wisconsin district for another the next school year. Interdistrict moves increased from 1.3 percent to 3.4 percent at the end of 2014-15, according to the Center for American Progress report.

“If you have excessive turnover of young staff, you are constantly in a building mode,” Ann Haack, Elkhart Lake-Glenbeulah school district administrator, told the Milwaukee Journal Sentinel in October 2016.

The Journal Sentinel examined spending and teacher data for 424 districts and found that 75 percent of districts were losing their teachers more often after Act 10 because a competitor offered better working conditions and compensation.

That turnover has been accompanied by lower, not higher, teacher salaries. According to the Center for American Progress, after Act 10, “year-over-year pay cuts were found across urban and rural counties” ranging from 2 to 3.4 percent when adjusted for inflation. The analysis also found that teachers with experience between five and 15 years have seen their annual salaries fall by an average of $4,273.

The Department of Public Instruction has started the Talent Development Initiative to  recruit, retain and develop more teachers in the state. The agency also has loosened teacher licensing requirements hoping to tackle teacher shortages. Yet the shortage of teachers in certain fields and regions of Wisconsin continues.

The Observatory rates Vinehout’s claim that Wisconsin has a teaching shortage as Verified.